The Vampire's Reflection (Of Light and Darkness #2)
by Shayne Leighton 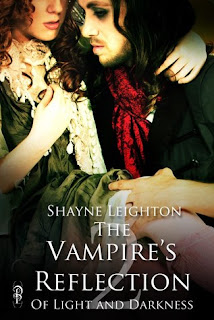 Blurb
Months after their brutal victory over Aiden and his hierarchy of Wizards, Charlotte and Valek have returned from Prague to their home in the Bohemian Occult City. However, this time, they are joined by their new band of misfit, magical friends. In the light of day, all seems to be at peace now that the Regime has been toppled, and the coven of rogue monsters has finally found their freedom. But Charlotte soon discovers that much like her adopted Vampire family, she has developed a strange addiction of her own. Her new disease is destroying her from the inside out, and Valek finds himself at a loss as he defies all odds to save her life. Danger continues to lurk around every corner and they realize that their happily-ever-after has not ended so happily after all, in this highly anticipated sequel of the Of Light and Darkness series.

My Review
Charlotte and Valek are back home after their battle with Aiden and the Wizards. They are hoping to settle in and have peace for a while. That doesn't seem like it is going to happen as they brought some misfit friends back with them. Valek has his hands full keeping the vampires he brought back under control and Charlotte keeps becoming sick. She seems to be wasting away and has a bad addiction. An addiction that may just kill her yet. Valek is looking for a cure, trying to keep her safe, the misfits under control and it seems they still have some danger to face yet. A danger that may just separate them.

I have always liked Charlotte. She seemed so sure in the first book of how she felt about Valek and she would do anything for him. I have to say she seemed like a different person in this book. She was weak do to her sickness and addiction. She has so much to face in this book and in some ways it is more than she faced in the first. I still liked her and truth be told I probably liked her more in this book. She has such an intense inner drive that keeps her going. Valek also seems different in this book to me. He cares so much for Charlotte and does what he can to help her. His willpower is really tested in this book.

I like the first book in this series and I enjoyed this one even more. The author puts these characters thru so much you wonder how they don't go insane. I liked seeing the new characters come into play and was surprised by a few of them. I wondered after the first book were this one would go and I have to say it was nothing like I thought would go in it. It was so much better. There is plenty of action as the misfits cause trouble, sometimes causing lots of damage that I think will have a long term effect, enemies and other people after Valek while all he wants to do is get Charlotte well and plenty of heartbreaking scenes that will leave you surprised. I don't do spoilers but you need to read this book with plenty of different kinds of people that are sure to please anyone. This isn't a light hearted book it is darker and I love it. The author has create a wonderful series that I just know is going to get better. Fans of the first book be ready to be surprised.
4 out of 5 Bats~Pam

Posted by Paranormal Reads at 11:42 AM