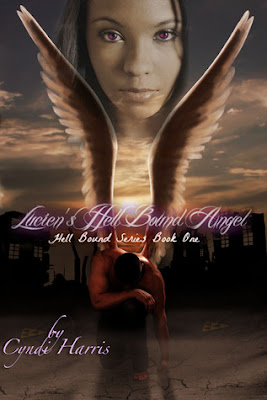 Book Blurb
Hybrid demon Lucien never really had much to live for. Since birth, Lucien had been trained to believe that he was only good for one thing.Killing.That was, until he gave it up.Being born and bred in Hell, he had nothing to look forward to but his dreams. There lied his ideal violet eyed woman, who performed anything his erotic mind could come up with.That was until his boss demands he goes to Earth to bring back a ruthless demon hell bent on destroying the world. Given only three days to complete the task, Lucien is sent back to Earth only to land smack dab in the middle of a battle between the very demon he is sent to drag back to Hell, and the woman he only thought existed in his dreams.Athena, a Guardian Angel trained to be a Demon Assassin, wanted to kill Lucien the moment he ruined her shot at killing the ruthless demon she’d been tracking since the moment she’d been sent to Earth. The only thing that stopped her was the fact that Lucien had thrown himself in the way, taking a bullet that was meant for her. Not only saving her life, but leaving her totally and utterly confused.As battle lines get drawn between Heaven and Hell, and passions run high between Lucien and Athena, will they find means to complete each task while fighting their undeniable lust for each other? Or will being together and losing everything mean more than anything else?
My Review


Raised to be a killer that is all Lucien knows. He is a hybrid deamon and the only thing good he has is his dreams of a violet eyed woman. When he is sent on a mission to bring back a demon determined on destroying the world he lands right in the middle of a battle with his dream woman and the rogue demon. He manages to save his dream woman only to have her be mad and ready to kill him. He made her miss her shot at the demon she is tracking. She is Athena a Guardian Angel trained to be a Demon Assassin and the only thing that keeps her from killing Lucien is he saved her life interfering. Lucien know he only has 3 days to bring the demon in and he should stay away from Athena considering she is a demon hunter for one but he thinks he can control his feelings for her and they might be able to work together even though one of them is on Heavens side and the other Hell.

This book sucks you in right from the start. You get to see Lucien right off the bat and know what he is and how he feels. Even if he is a demon you can not help but feel for him. Athena is such a kick butt character. Even when she is losing a battle she doesn't want help but does manage to use her head. I love the concept of these two. They are amazing when you get them together. You can see the sparks fly.

I really enjoyed devouring this book and that is what I did. Whether the action was a fight scene, a dream scene, or sparks flying your attention is kept. The book stays a nice pace and doesn't really lag anytime. You want these to to win and you want them together but you realize they are from different places and may not get to be together. I really became a sucker for these two and all they go through in this book. If you are looking for a new angel/demon story try this one. It has a little bit of everything for everyone. I love the cover and think it suits the book very well.
4 out of 5 Bats~Pam

Posted by Paranormal Reads at 6:30 AM