Touch Me by Callie Croix 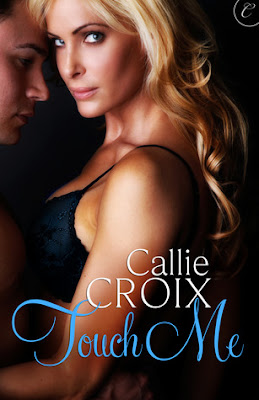 Not a Paranormal Book
Book Blurb
Arriving home on leave from his tour of duty, Army Captain Alex Montoya knows there's a beautiful woman waiting for him-his best friend's sister. She's always been off limits...until now. He fully intends to move them out of being "just friends" and encourage her to release the sexual needs he senses she's buried deep.Tianna McIntyre is starting over after her marriage ended. Her ex-husband weakened her self-esteem and caused her to deny her true sexual desires. But being around Alex brings all her dormant fantasies to the surface, and now Tianna feels the stirrings of her secret, submissive wishes.Determined to help repair the damage Tianna's ex did to her self-worth, Alex will use whatever means necessary to convince her they're meant for each other, including tying her down to make sure he has her full attention while he takes her to the heights of pleasure she's always dreamed of..
My Review
I received a copy of this book from NetGalley and the publisher for an honest review. Tianna has been living in her brother's best friend Alex house. Alex has been away with the army and when Tianna needed a place to stay after her divorce he gladly offered for her to stay there. When he arrives home he tries his best to stay away from her because she is his best friend's sister. Tianna is attracted to Alex but years of her husband killing her self esteem she doesn't think he will ever want her. They both realize they are attracted to each other and they begin to know what pleases each other. A jealous ex may just come between them and rip them apart.This is a short easy read that has plenty of steam. There is some small BDSM but it isn't in any way bad and it doesn't make you feel like Alex is trying to control Tianna. In fact he is giving her what she has always wanted and could never have. From the start you can see these two are meant for each other. They both help each other recover from all types of hurt done to them. If you are looking for a short steamy read I would say give this one a try.
4 out of 5 Bats~Pam

Posted by Paranormal Reads at 4:02 PM