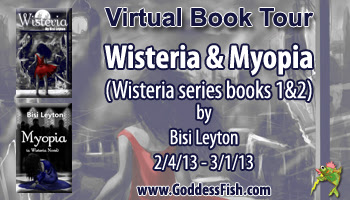 Hey everyone! Today I am taking part in the Wisteria & Myopia tour. I have a review of Myopia for you all, an excerpt from Wisteria and Myopia and a giveaway. 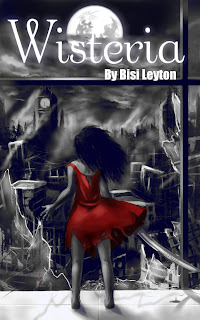 BLURB for Wisteria:
Sixteen year old Wisteria Kuti has two options—track the infected around the Isle of Smythe or leave the only known safe haven and face a world infested with flesh eating biters. But even with well-armed trackers, things go wrong and Wisteria ends up alone facing certain death, until she is rescued by the mysterious Bach. Uninfected, Bach is able to survive among the hordes of living dead.

Eighteen year old Bach, from a race known as The Family, has no interest in human affairs. He was sent here to complete his Great Walk and return home as a man—as a Sen Son. The Family regard humans as Dirt People, but Bach is drawn to this Terran girl, whom he has never seen before, but somehow knows.

Hunted by flesh eaters, cannibals, and the mysterious blood thirsty group called Red Phoenix, Wisteria and Bach make their way back to the Isle of Smythe, a community built on secrets and lies.

Wisteria Kuti whipped around and came face-to-face with the blood-red eyes of a hungry flesh-eating biter. The biter was a man, infected by Nero Disease, who had long lost his mind. He looked more animal than human and he wanted one thing—to feed on the flesh of uninfected people. The biter growled and staggered toward Wisteria.

She fled down the deserted road to the nearest house. The front door was locked. She kicked at the door, but it didn’t open. Taking out her handgun, she smashed through the window of the door.

“Ugh,” more biters growled behind her.

She spun around, fired once, and hit one in the head. She unlocked the door by reaching in and turning the lock. Once inside, she chained and bolted the door.

Crash—a biter smashed through another window into the house.

Wisteria’s heart jumped and she darted up the stairs as fast as she could.

“Get out of the house, Wisteria!” Rebecca radioed.

A biter grabbed her ankle as she ran. Falling hard on the steps, she wailed in pain. “Ah.” No time to cry, Wisteria. She fired at the biter holding her. One bullet left.

Three more biters appeared below and started coming up the stairs. Leaping up, she sprinted to the top floor and dashed into the first open doorway that led to the master bedroom. Locking the door, she headed straight for the window.

The infected clawed at the door, tearing it apart and snarling as they entered.

Link to my review of Wisteria is here. 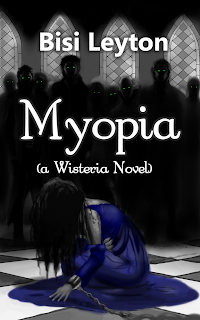 Sixteen-year-old Wisteria has embraced her deep bond with eighteen-year-old Bach, a member of a supernatural race called the Family, despite the risk of his family finding out. Should Bach’s people discover his bond with a human, Wisteria will be guaranteed a painful and bloody death—but somehow, being together is more important.

Their bond is tested when empirics, an elite group of Family investigators, are sent to the Isle of Smythe under the orders of Bach’s father to find artifacts stolen by the humans. They’re to find the artifacts at any cost. Among the empirics is Bach’s old friend, the stunning Alba, who has learned about Bach and Wisteria’s secret relationship, and surprisingly accepts this. With no one else in the Family to turn to, she becomes Bach’s ally and confidant, but possibly more.

As the empirics start to take over the town, Wisteria is torn between trusting Bach and the safety of the humans on Smythe. She soon realizes that she and Bach are on opposite sides of the war between the Family and Humans, and there is no middle ground. One of them must choose a side.

My Review
I loved Wisteria and I loved this book just as much if not more. Picking up around where Wisteria ended Myopia continues to follow Wisteria as she works as a tracker, Still goes to school, tries to keep her brother out of trouble, keep Bach a secret and survive. She has a lot going on but things are about to get worse. Empirics are on the way to find what the humans have stolen and if they find out about the bond between Bach and Wisteria it will mean her death. Add in the fact more biters are coming closer to the town and she has her hands full.

Wisteria is an amazing character to me because even if she is young she still tries to do what is right. People are constantly being cruel to her even when she is trying to save their lives. She also isn't beauty queen perfect and that makes her more real. Bach I had mixed feelings about in this book. One minute he seemed to love Wisteria and another to me it seemed he was ready to throw her to the curb.

I so loved getting to read this book. I enjoy zombie or biters as they are called in this book stories. This one has the accept of people from another plane and the biters are just a small part of the book. If you don't  like zombies have no fear you will still enjoy this book. It has a refreshing story line that hooks you. You are left begging to know what is going to happen to Wisteria and the people in the town next. You really don't know who to trust while you are reading this book and it keeps you on your toes. Quite a few times some of the humans I wished would get bit so Wisteria could cure them. Her brother is one whoo never thinks about anyone but hisself. Several secrets are revealed but you are still left needing to know more. It has me hooked. I want to know everything her mom knows. I will defentitly be waiting for the next book in this thrilling series. Be sure to grab and read these rivoting books.
5 out of 5 Bats~Pam

“You’ve got to be joking!” Sixteen-year-old Wisteria Kuti glared at about forty teenagers and a handful of preteens dancing wildly in the once deserted pub.

From the smell and heat, the partiers had been burning up the dance floor for hours. The music of the Law Abiding Citizens thumped through the restaurant, and she spotted an mp3 player hooked to large speakers propped on the bar.

Wisteria couldn’t believe they were having a party on Norton. Her stepfather, Major Elliot Coles, the head of security, would literally murder someone if he discovered that forty of the kids from the heavily fortified Isle of Smythe had snuck out onto the mainland.

“You’ve got to admit they’re having fun.” Garfield Simon, her best friend, was standing next to her while adjusting the strap of his crossbow. His long curly hair bounced as he nodded to the music. “Everyone’s okay and seems happy.”

After four years of living in fear of biters and being locked behind the walls of the Isle of Smythe, she could see why the kids wanted a night of freedom and reckless abandon. Even she wanted one, but it wasn’t safe.

With eighty percent of the world’s population crazy, flesh eating biters, being outside wasn’t just a bad idea, it was deadly. The only thing biters wanted was to feed and the only things they ate were uninfected people. And people who didn’t get eaten most likely ended up becoming infected and turning into biters themselves. As a best case scenario, even one biter walking into this pub could result in everyone becoming infected.

“They’ve been having this party how long?” she asked Amanda Weiss, the tall, slender blonde girl who had come with them.

“This is the sixth party.” Amanda’s blue eyes glittered as she tried to laugh it off. “It’s not that big a deal. We’ve always been safe.”

“Six,” Wisteria choked out. “And you knew about this and didn’t say anything?”

“We couldn’t tell you because of your mum and your stepdad,” Amanda explained. “If they found out, they’d stop the party.”

“David’s here and he’s my brother,” Wisteria pointed out, but she knew that was different. David was Amanda’s boyfriend.

“Yeah, but you’re a tracker. David’s not, so you have to tell Coles.” Amanda frowned, knitting her blonde eyebrows together. “Everyone just wanted a few nights out. We’ve been working all summer on farms for the harvest. We just need a break. I mean, I know it’s dumb, but we really thought this town was safe. David said there hasn’t been an infected reported in Norton in forever.”

“David isn’t a tracker or he’d have half a clue,” Garfield remarked.

Garfield also hadn’t been invited to the party, but Wisteria suspected that had more to with him being a rat catcher. Even though most kids on the island ate rats, they were too proud to publically admit that. One way to deny it was steering clear of Garfield.

Wisteria scowled at the boy. It was no secret he hated the notion of Amanda and David being together because he was so in love with Amanda. Garfield had had a crush on her, the prettiest girl on the island, since he first saw her. Sadly for him, Amanda only wanted to be friends.

“Well, I’m glad you told me, Amanda. I know Hailey’s going to make you pay for doing it.” Wisteria was still surprised Amanda had come to her with this.

“Ahh,” a boy shrieked as he ran past them. 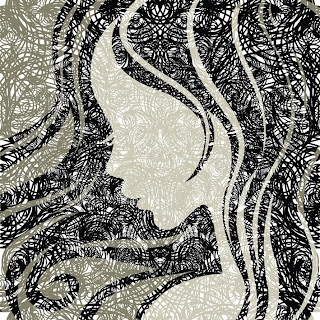 AUTHOR Bio and Links:
Bisi Leyton was born in East London in 1978. She grew up in London, Nigeria and the States, listening to the stories life and love from aunts, cousins and big sisters.She lives in London, but has worked around Europe including France, Germany, Ireland, Belgium and the Czech Republic. She has a fondness for reading graphic novels.
Facebook page: https://www.facebook.com/Wisteriabooks
Current Blog: http://bisileyton.blogspot.com/
Old Blog: http://bisileyton.wordpress.com/
@bisileyton
http://www.goodreads.com/Bisileyton
BookTrailer: http://www.youtube.com/watch?v=t_TWuWK_bbY&feature=context-cha
and http://www.youtube.com/watch?v=fvC9iJckrs4&feature=context-cha 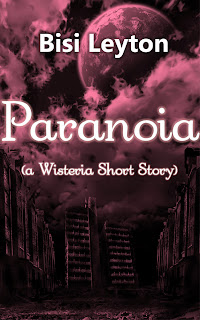 Bisi will award a $15 Amazon GC to one randomly drawn commenter during the tour. Be sure to comment below with your email address and follow the tour to better your chances.

Posted by Paranormal Reads at 2:58 AM