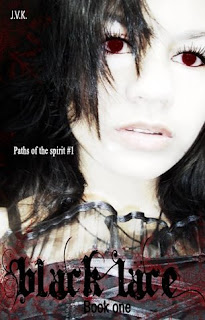 Vivian Donovan Rei eighteen year old girl whose biggest problem is which gun to take when she goes out at night. Particularly small and apathetic, heir to a wealthy family, she was promised in marriage to one of the last pureblooded vampire. As such, she must comply with the laws of the Council, headed by her future father-in-law. Rei keeps her secrets fiercely and not allow anyone near her easily. She is the "watchdog" of the order of Raven, town utopia for creatures who broke off from the known evolution and seek asylum. In the Raven she is the law, judge, jury and executioner. "Black Lace" is a breathtaking story about the "free" choice, love and ways of life. Exciting and unusual story of love and betrayal that will leave you captivated and with never-ending need for more. ~Goodreads Blurb

J.V.K really developed a story line that was strong and very gripping; it catches your attention and has instances that you can relate to in real life, she builds a reality that is not only believable but also encouraging, as her story Black Lace is really all about free choice. 4/5 Bats

For full review > Goodreads
Posted by Paranormal Reads at 6:07 PM