Welcome to another Bloody Book Haul.
This is my haul from the last two weeks. Five of these came from the library and I received for review. 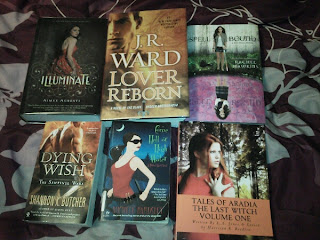 Haven Terra is a brainy, shy high school outcast. But everything begins to change when she turns sixteen. Along with her best friend Dante and their quiet and brilliant classmate Lance, she is awarded a prestigious internship in the big city— Chicago—and is sent to live and work at a swanky and stylish hotel under the watchful eyes of a group of gorgeous and shockingly young-looking strangers: powerful and alluring hotel owner Aurelia Brown; her second-in-command, the dashing Lucian Grove; and their stunning but aloof staff of glamazons called The Outfit.

As Haven begins falling for Lucian, she discovers that these beautiful people are not quite what they seem. With the help of a mysterious book, she uncovers a network of secret passageways from the hotel’s jazz-age past that leads her to the heart of the evil agenda of Aurelia and company: they’re in the business of buying souls. Will they succeed in wooing Haven to join them in their recruitment efforts, or will she be able to thwart this devilish set’s plans to take the souls of her classmates on prom night at the hotel?

Illuminate is an exciting saga of a teen’s first taste of independence, her experience in the lap of luxury, and her discovery she may possess strength greater than she ever knew.

I have to say the cover grabbed my eye on this one and the blurb sounds really good as well.

Ever since the death of his shellan, Tohrment is a heartbroken shadow of the vampire leader he once was. Brought back to the Brotherhood by a self-serving fallen angel, he fights again with ruthless vengeance- and is unprepared for a new tragedy. Seeing his beloved in dreams—trapped in a cold, desolate netherworld—he turns to the angel to save his former mate, only to despair at the path he himself must take to set her free. As war with the lessers rages, and a new clan of vampires vies for the Blind King’s throne, Tohr struggles between an unforgettable past, and a future that he doesn’t know he can live with… but can’t seem to turn away from.

Do I even need to say why I got this book. Love the BDB men.

Hailed as “impossible to put down,” the Hex Hall series has both critics and teens cheering. With a winning combination of romance, action, magic and humor, this third volume will leave readers enchanted.

Just as Sophie Mercer has come to accept her extraordinary magical powers as a demon, the Prodigium Council strips them away. Now Sophie is defenseless, alone, and at the mercy of her sworn enemies—the Brannicks, a family of warrior women who hunt down the Prodigium. Or at least that’s what Sophie thinks, until she makes a surprising discovery. The Brannicks know an epic war is coming, and they believe Sophie is the only one powerful enough to stop the world from ending. But without her magic, Sophie isn’t as confident.

Sophie’s bound for one hell of a ride—can she get her powers back before it’s too late?

The final book in this trilogy and I kinda hate to read it. I don't want it to be over.

Jackie Patton has been rescued by the Theronai from her captivity and torture at the hands of the Synestryn, only to learn that she’s a potential match for the Theronai warriors who need a woman to literally save their lives. Forced to choose, she unexpectedly selects Iain, a cold-hearted warrior who doesn’t want to be saved. Iain is convinced that it’s too late—that his soul is already as dead as his former betrothed, killed by the Synestryn. Still, he is the only man Jackie feels a measure of peace around and the only one she wants. But is Iain indeed beyond saving?

This is another series I really love. I look forward to Iain's story.

Everybody makes mistakes-and my firstone was named Connor, a heart- stealing Scottish hottie. I thought our night together was the beautiful beginning to a love story, which turned out to be my second mistake. I, Phoebe Allen, lifelong Broken Heart resident and vampire, am now mated to a half-demon.

Thankfully Phoebe's four-year-old son Danny is safely away at Disneyworld with his human father. Because Phoebe's right in the middle of major paranormal drama, helping Connor and his rag-tag group of friends retrieve part of an ancient talisman in order to ward off Connor's vicious stepmother, an uber-demon named Lilith. Phoebe swears she isn't falling for any of Connor's demon charm. But still, he's willing to do anything to protect her and prevent demons from storming into Broken Heart. And her undead heart can't resist a bad boy with identity issues...

I grabbed this at random cause it sounded interesting.

Tales of Aradia The Last Witch Volume One by L.A. Jones

Unknown to the humans who hung innocent people at the Salem Witch Trials real witches of the hidden race were killed for fear of exposure or at least that's what all the vampires, werewolves, and other races thought.There was not one witch whom survived the genocide of the Salem Witch Trials. But one day a girl named Aradia moves to Salem, MA and all that changes

I got this for review and it sounds really good. I love the cover of the book.

Tales of Aradia the Last Witch Volume 1 on Goodreads

That is what I got to read lately. What have you bought or borrowed?
~Pam
Posted by Paranormal Reads at 6:35 PM