The Last Bastion of the Living Blitz

Hey everyone! We have the Black Friday Blitz for The Last Bastion of the Living today on the blog. There is info on the book, a guest post and a giveaway for you all. 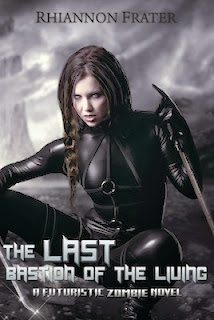 Synopsis:
The Bastion was humanity’s last hope against the fearsome undead creatures known as the Inferi Scourge. A fortified city with a high wall, surrounded by lush land rich with all the resources needed to survive, protected by high mountain summits, and a massive gate to secure the only pass into the valley, the Bastion became the last stronghold of the living on earth. But one fateful day, the gate failed and the Inferi Scourge destroyed the human settlements outside the walls and trapped the survivors inside the city. Now decades later, the last remaining humans are struggling to survive in a dying city as resources and hope dwindle.

Vanguard Maria Martinez has lived her whole life within the towering walls of steel. She yearns for a life away from the overcrowded streets, rolling blackouts, and food shortages, but there is no hope for anyone as long as the Inferi Scourge howl outside the high walls. Her only refuge from the daily grind is in the arms of her lover, Dwayne Reichardt, an officer in the Bastion Constabulary. Both are highly-decorated veterans of the last disastrous push against the Inferi Scourge. Their secret affair is her only happiness.

Then one day Maria is summoned to meet with a mysterious representative from the Science Warfare Division and is offered the opportunity to finally destroy the Inferi Scourge in the valley and close the gate. The rewards of success are great, but she will have to sacrifice everything, possibly even her life, to accomplish the ultimate goal of securing the future of humanity and saving it from extinction.


The Badass Heroine
By
Rhiannon Frater

I’m not going to lie. I need to be honest with you from the start. The honest to God truth of the matter is that I hate/despise/loathe a lot female characters that fall under the “badass” heroine banner.  I often have to suppress the deep, dark desire to give them a roundhouse kick to the face.
Well, if I could actually manage to do a roundhouse kick. I’m not that limber.
Though there are plenty of amazing, strong female characters that I absolutely love with all my heart, there are a smorgasbord of female characters that really rub me the wrong way. The reason for this is simple. Badass has been confused with women who are just plain bitchy, self-centered, and mean.
I didn’t really realize how ingrained the bitchy heroine had become in entertainment until I saw a script for one of my books. The heroine uttered a lot of really mean, nasty comments in the first few pages of the script and I was stunned by how awful she came across. I spoke to the scriptwriter about the added dialog and he answered, “Oh, I added that because I wanted her to come across as a strong.”
“Uh, strong doesn’t mean bitchy,” I said carefully. To my surprise, and relief, he agreed and those lines were removed.
But after that event, I realized that was exactly why some heroines really rub me the wrong way. To make a woman appear strong, a lot of writers have defaulted to making her really bitchy, egocentric, and often just plain mean. It hurts me whenever I see this trope in a book, movie, or TV show. A woman doesn’t have to be a bitch to be strong or badass.
A badass female character should be someone you can see as a friend. Someone you love, cheer for, and believe in. You understand they’re flawed, but that’s okay. As they keep working hard to overcome all their obstacles and achieve a happy ending, you’re invested in their journey.
Even when my heroines have something exceptional about them like Vanguard Maria Martinez in THE LAST BASTION OF THE LIVING, they exist realistically in their circumstances. Maria’s military training, intelligence, and determination to accomplish her mission all contribute to her badass factor.  But the power that compels her to do extraordinary things isn’t her anger at an unfair world, but her love for a man who loves and respects her. Maria not only serves The Bastion, but her own heart. She struggles with fear, suffers loss, and knows that she may lose her life in the battle against the Inferi Scourge. But victory means freedom from the undead hordes and the ability to build her life with Dwayne, the man who sees beyond her hard veneer to the women she is inside.
My goal when writing my strong female protagonists is to create realistic women who have strengths and flaws just like everyone else does.  I don’t create perfect people that have nothing bad happen to them. Or women that all the men want to be with and all other women hate. I create women who could live in our own world very easily. They could be your neighbor, friend, or family member.
In the end, I think Maria Martinez is a badass heroine because her strength doesn’t come from being bitchy, but from being a woman willing to do her very best to overcame the most terrible odds.
AUTHOR BIO: 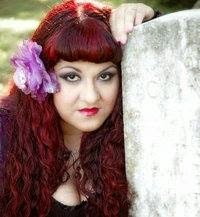 Rhiannon Frater is the award-winning author of over a dozen books, including the As the World Dies zombie trilogy (Tor), as well as independent works such as The Last Bastion of the Living (declared the #1 Zombie Release of 2012 by Explorations Fantasy Blog and the #1 Zombie Novel of the Decade by B&N Book Blog), and other horror novels. Her next novel for Tor, Dead Spots, will be published in 2014. She was born and raised a Texan and presently lives in Austin, Texas with her husband and furry children (a.k.a pets). She loves scary movies, sci-fi and horror shows, playing video games, cooking, dyeing her hair weird colors, and shopping for Betsey Johnson purses and shoes.

The Last Bastion of the Living will be on sale for $0.99 on Black Friday. Be sure to grab your copy!
Posted by PamM at 12:30 AM