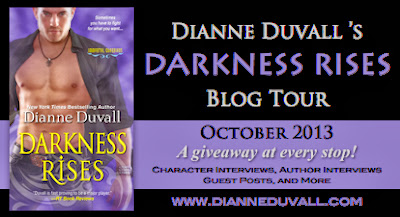 Hi everyone! Today we have a stop on the Darkness Rises blog tour. This is a wonderful book and series. We have an interview with the author Dianne Duvall and a giveaway for you all. 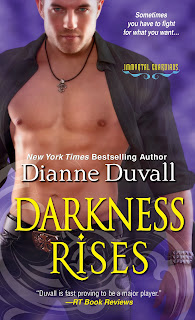 Blurb
Krysta is used to getting the drop on vampires. Her "special abilities" aren't much, but the plan is simple—she plays helpless pretty young thing to lure them in. Then her shoto swords come out and it's bye-bye, bloodsucker. Until one night she finds herself with an unexpected ally. He's a vampire, all right, but different. Mysterious. Handsome. And more interested in saving her skin than draining it.

Étienne has been an Immortal Guardian for two hundred years—long enough to know that Krysta is special. He can't stop thinking about her long legs, even more than her short swords. Then he discovers the vamps she's exterminating have friends in high places, and the Guardians are in danger too. He'll have to accept Krysta's help to save them. The stakes for a mortal are high. But the cost to his heart might be higher. . .

Interview
Thanks so much for joining us! And thank you, Pam, for letting me visit Paranormal Reads and helping me celebrate the release of DARKNESS RISES, the fourth book in my Immortal Guardians paranormal romance series!

How many books will there be in the Immortal Guardians series?
I haven’t decided yet, but can tell you that there will be at least seven, most likely more. As a writer, I tend to be a pantser as opposed to a plotter, so I’m letting the series arc unfold at its own pace and seeing, book by book, where it will take me.

Do you have a favorite one of the series?
I think each new release is my favorite . . . until I write the next one. Then IT becomes my new favorite. I not only enjoy exploring a new relationship with each new couple, but love seeing what’s happening with the couples from previous novels. If I absolutely had to choose one, however, I suppose it would be DARKNESS DAWNS, because that’s the book that started it all.

Do you have a favorite quote from Darkness Rises?
I actually have a long list of them. I jot them down as I go over copyedits and proofs so I can keep them in mind for the Favorite Quote Friday segment on my blog. This one, spoken by the heroine’s brother, always makes me smile:

It just seems to embody both the humor and the action found in the novel.

Which book was the hardest for you to write?
NIGHT REIGNS, Book 2 in the series. There was a scene in which Ami, the heroine, was tortured that was particularly difficult to write. But, for the first time, I also faced the challenge of deciding how much information from the first book I should include in the second. There’s a precarious balance that authors who write a series of books that may also be read as stand-alones must achieve in providing readers with enough information to keep them from feeling lost if they didn’t read the first book without including so much that it is off-putting to those who HAVE read it.

Which character is most like you?
Hmm. I think Krysta, the heroine of DARKNESS RISES. At the very least, we share the same sense of humor. Or perhaps Ami, the heroine of NIGHT REIGNS. Like Ami, I tend to be shy around strangers.

Are any of your characters based on anyone you know or have traits like them?
No. Each character is new and unique and simply a product of my imagination. If anything, one might say the teasing banter Immortal Guardians engage in each time they gather is inspired by the laughter and teasing that’s such a big part of my own life.

If you were going into battle and could only have one of your characters at your side who would it be?
Seth, the leader of the Immortal Guardians. As the eldest and most powerful among them, there is very little he can’t do.

Who designed the covers for your books?
Janice Rossi, the Art Director at Kensington (my publisher), designs the covers. Aren’t they lovely?

What is the hardest part of writing a series?
Making each book a stand-alone novel. I not only am challenged by the balancing act I mentioned earlier, but also must resist the urge to spend too much time with previous heroes and heroines I enjoy “seeing” again.

What do you do when you’re not writing?
I work in the local independent film industry in a variety of capacities, my favorite of which is providing Special FX or Special FX make-up (a.k.a. blood and guts make-up). As far as down time is concerned, I enjoy spending time with my family, reading, and pretty much anything that allows me to give my creative spirit free reign.

When did you know you wanted to be a writer?
I actually wrote my first romance — a teen historical romance — when I was around thirteen years old, but didn’t pick up the proverbial pen again until I majored in journalism in college. It didn’t take long for me to realize non-fiction would never thrill me as much as writing fiction does. So, I changed my major to English, gave my imagination free reign, and happily lost myself in my favorite genre.

If you could be any kind of paranormal creature what would you be and why?
An Immortal Guardian healer like Roland, but only if my husband could transform without turning vampire.  If he couldn’t, I would want to be a gifted one who could heal with a touch. I just like the idea of being able to cure illnesses, heal wounds, and help those in pain.

Anything you wish to say to your readers?
Thank you so much for your support! You’ve been so generous, helping me spread the word about my series. And your wonderful comments, messages, and emails never fail to make me smile. I hope you’ll enjoy Étienne and Krysta’s story! Thank you again!

What is the first book you remember reading?
There Was an Old Lady Who Swallowed a Fly. In retrospect, it isn’t the most pleasant of tales.

Thank you so much Dianne for the chance to be a part of this!
Thank you, Pam, for the wonderful interview! 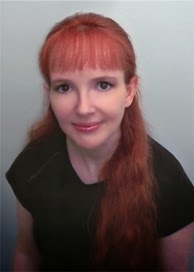 Dianne Duvall is the New York Times and USA Today bestselling author of the Immortal Guardians paranormal romance series. Her debut novel, Darkness Dawns, was nominated for the RT Reviewers' Choice Award for Best Vampire Romance by RT Book Reviews and for Best Paranormal Romance—Vampire by The Romance Reviews. ensuing books in the series — Night Reigns, Phantom Shadows, and the Predatory anthology — have been deemed Top Picks by RT Book Reviews, The Romance Reviews, and/or Night Owl Reviews. Darkness Rises, her latest release, has also been declared a Top Pick by Night Owl Reviews.

When she isn't writing, Dianne is active in the independent film industry and once even appeared onscreen as a machete-wielding maniac not unlike the vampires in her novels. 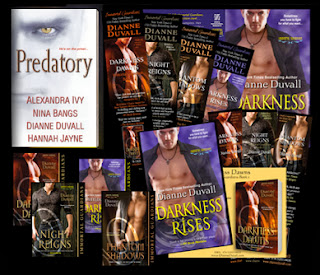 Which of your favorite fictional characters is most like you? Let me know for a chance to win a signed copy of PREDATORY, my last release, + Immortal Guardians swag.
Simply comment below with a way to contact you answering the question.

Dianne is also having a giveaway on her website for some great prizes. Be sure to check it out. 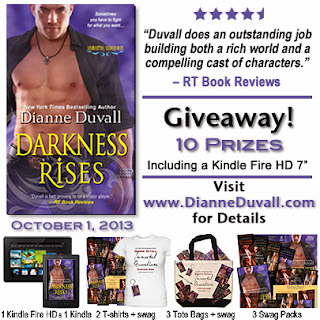 http://dianneduvall.com/DRreleasegiveaway.htm
Posted by PamM at 2:00 AM