Hi all I am happy to reveal the stunning cover of Obtained by Shanora Williams. It is so stunning and beautiful. 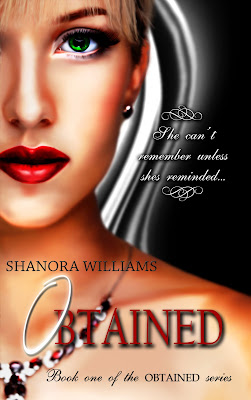 Look at the eye doesn't it just pop right out!

Here is the book blurb for this amazing book.
Jules Maddox isn’t just some familiar guy that sits at the corner table of the coffee shop to sketch in his sketchbook. No. He’s something much darker and mysterious than that and when Alexandria Marshall—a happy-go-lucky girl that can’t remember a thing about her past—speaks to him, she isn’t surprised to see Mr. Hot/Creep run off quickly without saying a word. That leaves Alexandria with no choice but to wonder what she’s done to make him react that way towards her. She feels as if she knows him but she can’t put her finger on it. And without being able to remember her past, she feels that she will probably never figure it out.After being assaulted and attacked in an alley of New York, Alexandria figures out that Jules isn’t normal and has a reason to be secretive and mysterious. As Jules fights off her attacker, she witnesses his glowing eyes and fists. And it’s not until Jules is finished that he realizes what he has just done and once again, he runs away without a word.Alexandria can’t keep Jules off of her mind but when Felix Wells, a rich architect, appears at her door step, everything begins to unravel and reveal itself. She falls for Felix on the first day and when Jules finds out, he isn’t pleased and instead of running off like he usually would, he decides to tell her everything that he knows and what they really are. What Alexandria doesn’t know is that she and Jules are mates and if the “Leaders” find out that she is being drawn in by more than one mate, their lives will be at stake. Jules didn’t want to risk telling her but he refuses to lose her to Felix who is much more dangerous than some rich architect. But no matter how much Alexandria tries to forget about Felix and stick with Jules, Felix just comes back effortlessly to obtain her again. Because now she knows everything-- her mates know everything-- and if the Leaders find out, they will be sure that the lives of Alexandria and Jules cease to exist.

How would you like to read two quotes as well?
I thought you might.
"I can’t lose you because losing you is like losing myself. I won’t know how to live on . . . I won’t know what to do. Everything for me will be blank. My soul will no longer be intact and we all know that a person without a soul is no one at all." - OBTAINED. February, 2013.
"“Are you upset with me?” Jules asks, smirking.
That completely sets me on edge. Upset with you? I am furious with you! “You were flirting with her in my face, Jules. What the hell is your problem?” I ask, fuming.
He chuckles lightly. “You are jealous,” he points out.
Jealous? Damn it. He’s right. I am jealous and at the thought of it, my cheeks burn even more. He’s embarrassed me, like always.
“You should just leave,” I mutter then fold my arms.
“I really don’t believe my leaving will help you solve anything, Alexandria. Don’t push your problems away. Say what is on your mind.”
Say what is on my mind? He really wants me to go there? Honestly, I don’t think he will ever speak to me again if I really say what is on my mind. “Jules, please just—”
“Do you see how it feels?” he asks, cutting my sentence off with furrowed brows. I mimic his expression by frowning but my glare is a bit confused. “Do you see how it feels when someone you like shows attention to someone else? Do you realize how annoying it is? You saw Felix sometime between last night and this morning and you weren’t even going to tell me.”" - OBTAINED. February, 2013
Here are the author links to check out
Facebook Fan page:http://www.facebook.com/ShanoraWilliamsAuthorGoodreads:http://www.goodreads.com/author/show/6476392.Shanora_WilliamsBlog: http://shanorawilliams.blogspot.com/

I look forward to this books release and want to thank Shanora for letting us be a part of this cover reveal.

Posted by Paranormal Reads at 12:01 AM