Today  I am very excited to be a part of this tour. I adore this book and sure you will as well. 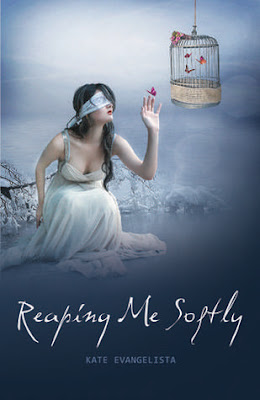 Book Blurb
Ever since a near-death-experience on the operating table, seventeen-year-old Arianne Wilson can see dead people. Just as she’s learned to accept her new-found talents, she discovers that the boy she’s had a crush on since freshman year, Niko Clark, is a Reaper.At last they have something in common, but that doesn’t mean life is getting any easier. All while facing merciless bullying from the most powerful girl in school, Arianne’s world is turned upside down after Niko accidentally reaps the soul of someone she loves. This sends them both into a spiral that threatens to end Arianne’s life. But will Niko break his own Reaper’s code to save her? And what would the consequences be if he did?


Seventeen-year-old Arianne Wilson can see dead people ever since she had a near death experience. She just ignores them and tries to go on with her life. Her life isn't simple other than seeing dead people she is bullied constantly at school by a girl named Darla. The only friend she has is a boy named Ben who is her best friend. Niko is the boy she has crushed on for years. When they get the chance to work together he wonders why he has never noticed her. Arianne soon finds that Niko has a secret as well. He is a Reaper and they have huge obstacles to overcome if they want to be together.

First off I love the cover it is beautiful. Now on to a little more about the characters. Arianne is a strong girl who takes all the things that life throws her and moves on. She doesn't want anyone to help her with her bully and you get to see her inner strength as she gets picked on constantly. She only lets her sister see everything good that is going on and nothing bad. She gets tongue tied at first with Niko and I think it is so cute the way she acts around him. Ben is the best friend anyone could have. He is always there for Arianne whenever she needs someone to talk to. He knows all her secrets and never doubts her. Darla is beyond the typical mean girl. This chic is so evil and everyone does what she says. Teachers won't even mess with her. Now we have Niko and I will have to say this is my new book crush. I feel like a cougar saying that but he is so awesome. He has that whole dark, mysterious, depressed thing going on at first and is oblivious to girls it seems. It helps me crush on him to know he does have an older soul so that doesn't make me feel to much like a cougar. I adore this boy!

The story line is fantastic and unlike any that I have read. You get to meet the Devil and he isn't what you expect. Seeing what goes on in the inside of hell is a nice touch to the book. The love between Arianne and Niko does happen fast but with what both of them can do it makes it believable. The lengths these two go through to be together is so amazing. You also get to see what made Darla the way she is and I didn't see that coming what is revealed.There is a fight scene you really don't want to miss reading about. I read this very quickly as the only time I put it down was to rush and say I had a new book crush to people. I also love that it has a line in it with two of my favorite 80's toys. I love this book and encourage everyone to pick this up. I would say more but I don't want to give spoilers. I can not wait to read about what happens next in this series.
5 out of 5 Bats~Pam

Be sure to check out the rest of the tour found at the following link.
http://atomrbookblogtours.com/2012/09/12/tour-reaping-me-softly-by-kate-evangelista-and-omnific-publishing/ 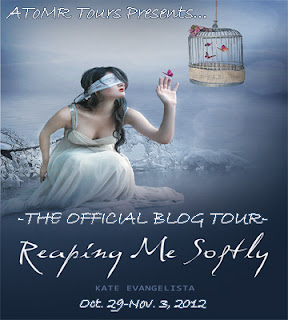 Be sure to enter the easy rafflecopter below for your chance to win. They are giving away 10 ebooks. You want this book!! Good luck.

a Rafflecopter giveaway
Posted by Paranormal Reads at 12:01 AM