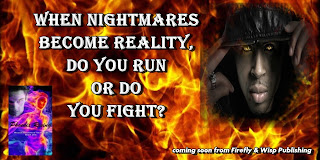 We are so thankful to be a part of this great tour. This is an amazing book and I enjoyed it. Before we get to my review here is some information about the author and the book. 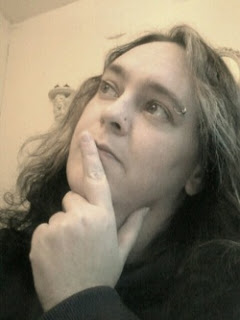 Author Bio:
Lisa C. Morgan lives in rural Upstate NY with her husband, three children, a degu, a precocious Siberian Husky, and a half Pom/Half Chi spoiled baby named Salacious B. Dustbunny.
A lover of books and words, it has always been her desire to tell stories that the people near her could listen and read, escaping the world around them by way of the page.
Always having a new story idea popping into her head, (sometimes at the least appropriate of times,) Lisa can always be found with a notebook and writing utensil somewhere within reach, just as her 8th grade teacher made her promise to do.Lisa has two short stories previously published in anthologies. A Romantic short titled Nothing’s Terminal (A Home for the Holidays; December, 2011) and  a zombie themed short titled Antidote (The Thorn of Death; March 2012). Her debut novel- Phoenix Rising is the first in a new YA series Maggie Henning & The Realm and will be released July 2012. Upcoming will be the continuation in the series- Phoenix Burning, Phoenix Shadow, and Phoenix Ashes.
When she isn't writing or taxing kids, Lisa enjoys reading, football, softball, cooking, singing & dancing, tattoos, and spending time with family and friends. 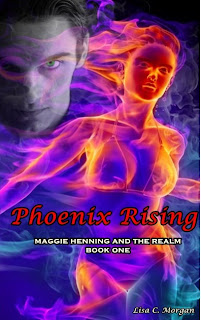 BOOK BLURB:
Maggie has lived the last ten years with a woman who isn't her mother and carrying the label "Daughter of John Henning", a man sentenced to live out his days at Sunnyview Psychiatric Hospital after his conviction of fire bombing a church...

and killing the 8 people inside.

What Maggie learns will change her life.
She is the last of a race of creatures known as "The Phoenix", a race of supernatural beings with the ability to wield and control fire.

And she will need that power now...

Revenants- walking, living, skeletal creatures who have waged a war against an unseen, parallel world known simply as The Realm- need Maggie's blood to bring them to a full power...a power that will give them an unbeatable edge and offer the deciding weapon in this war.

Maggie is not alone as she learns not only what she really is, but what it is her destiny to become... 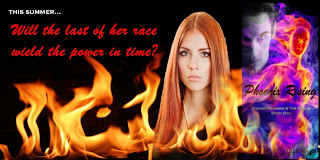 Phoenix Rising (Maggie Henning & The Realm: book 1)
Synopsis
“…And I believe you do not have the control over your fire yet to destroy us all.”  He was calling my bluff. Worse, he was right.

Phoenix Rising is a first person story revolving around sixteen year old Maggie Henning. Maggie lives with her mother and has spent the previous ten years of her life wearing a label- daughter of the murderer John Henning. Her father resides at Sunnybrook Psychiatric Hospital, having been convicted of killing eight people inside of a local church, burning them alive. Or so Maggie has always been told. Maggie’s world begins to change after finding a letter addressed to her from the psychiatric hospital that offers an ominous warning. She ignores the letter, waving it off as some random nut sending her mail.
Having to endure visits with her father, per her mother’s request, has left Maggie feeling isolated and alone, with exception to her one friend, Stephanie; daughter of her father’s deceased law partner. In an effort to cheer Maggie up, Stephanie and she take in a little “retail therapy” at the local mall.
Maggie finds herself drawn into a music store she doesn’t normally go in to, drawn by a melody played by a mysterious raven haired guy that apparently alarms Maggie’s friend.
Following an argument, Maggie is abandoned at the shopping center to walk home, only to spot the mystery man again, riding a motorcycle, who offers her a ride home. Maggie isn’t normally that reckless, but she decides to throw caution to the wing and take him up on the offer.
The stage is set after a visit to her see her father, normally in a fairly catatonic state, comes aware, giving Maggie the same warning as the letter she received. Creatures, called “revenants” want Maggie’s blood. Just when Maggie had felt optimistic about her father, the hopes were dashed. But, she had seen strange things; bones, pointed teeth, rotting flesh…
The drive home reveals that Maggie’s mother is NOT what she seemed to be and after she’s attacked, the mystery guy, named Michel, arrives and rescues Maggie from one of these creatures.
Maggie is taken to “The Trust”, a manor house that offers protection to beings from “The Realm”- another world that lives right below the surface of the Mortal one. Maggie begins to learn of this strange world and the creatures that inhabit it, including a young witch with much to live up to named Autumn, a light hearted fairy named Seatha, and two Vampire Princes of The Realm, one of which is Michel. Michel is kind and level headed. Luc, his brother, is a smart ass and calls things as he sees them. The two brothers tend to be opposites of each other in most things, with exceptions to their kingdom and now, Maggie.
Maggie meets Liam at The Trust, learning that the crazy board game eating man from the asylum is really her grandfather. Liam explains The Realm, offering guidance, and more importantly, informs Maggie of what she really is- the last of a race of beings called “Phoenixes”, creatures who have the ability to call fire and use it as they wish.
The revenants, led by a creature named Ossa, will stop at nothing to get Maggie; needing her blood to bring them to full power.
Maggie must not only come to believe in all that she has heard, including that she’s one of these mythical creatures from stories, but also learn how to wield her power to face the creatures that would destroy both worlds Maggie has come to know of. All of this, even as she begins to feel more than mere friendship with one of the Princes… 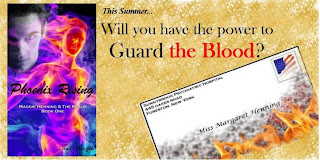 My Review:
What an emotional rollercoaster ride this amazing book is. I was hooked from page one and couldn’t stop reading until the last page.

Maggie is a normal sixteen year old girl until one day she has to go visit her dad in the mental hospital and her whole world changes. She starts seeing skeletal beings with pointy teeth one minute and then the next they are looking like normal people. Her dad tells her to guard the blood something she doesn’t understand until later. While leaving the hospital who she thinks is her mother starts changing before her eyes and the boy Michael that she met at the mall earlier comes to rescue her. He takes her to a place where Maggie finds out she is very special and can stop a war with revenants since she is the last phoenix. Maggie is shocked to learn this and that a whole other world exists with vampires, fairies, witches, elves, and more. Maggie doesn’t think she is strong enough to win this war but with the help of her new friends and the love of Michael she starts to believe in herself. But with the death of one she loves can Maggie move forward and be the phoenix they need her to be?

I don’t even know where to start with this review. This book is so different but so amazing and fresh in the paranormal genre. I loved Maggie from the start. Life has dealt her some hard cards but she deals with them. She is a lot stronger then she realizes. Michael is amazing. He is the kind of guy we all dream about. He is smart, sweet, sexy, and I could get lost in his emerald eyes forever. Luc who is Michael’s older brother is such a jerk at the beginning of the book but as we learn of the heart ache he has suffered you understand him more and you can feel he is a good guy. Maggie’s friends Autumn and Seatha are so fun but what do you expect with a witch and faerie.

I am not one of those people who cry in books. I can count on one hand how many times it has happened and have fingers left. So for a book to make me cry you know it’s amazing and heart breaking. And Phoenix Rising had me in tears for the last few chapters so much so I wanted to throw my kindle because I was so upset with the author for killing this character. I felt like my whole world had come crumbling down just like Maggie did.

Through laughter, finding your self, true love, friendship, heart break, and just plain breaking down in tears this is one of my favorite reads of 2012 and I can’t wait for the next emotional rollercoaster ride that Lisa Morgan takes me on. 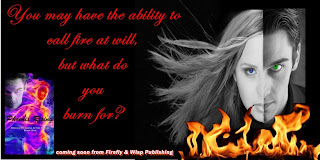 Make sure you check out the rest of the tour and enter the rafflecopter below.

a Rafflecopter giveaway
Posted by Paranormal Reads at 1:26 AM