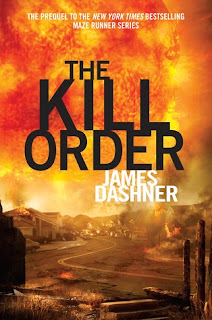 Goodreads Blurb
The prequel to the New York Times bestselling Maze Runner series.Before WICKED was formed, before the Glade was built, before Thomas entered the Maze, sun flares hit the earth and mankind fell to disease.Mark and Trina were there when it happened, and they survived. But surviving the sun flares was easy compared to what came next. Now a disease of rage and lunacy races across the eastern United States, and there’s something suspicious about its origin. Worse yet, it’s mutating, and all evidence suggests that it will bring humanity to its knees.Mark and Trina are convinced there’s a way to save those left living from descending into madness. And they’re determined to find it—if they can stay alive. Because in this new, devastated world, every life has a price. And to some, you’re worth more dead than alive.

My Review
I received this book from NetGalley for a honest review. This is the prequel to the Maze Runner series. It tells all about how the Virus or Flare got started. You get to go back to when the sun flares started and how mankind started to end. The Kill Order follows a group as they escape tidal waves, sun flares and evil humans. Living in the wilderness they encounter the madness as the flare begins to spread. We follow Mark, Alec, Trina and Lana as they run from the ships that is killing people and kidnapping them for experiments. Never knowing who will take the dive into madness next they are constantly on the run. I pick this up thinking it would be more of Thomas and the other kids from this series background. It is not it is about a whole new group of people. It goes back and you get to see through Mark's eyes when the sun flares begin and how he survived them. It skips around some between when it all started and the now for this new group as they discover ships shooting people with darts. I didn't like the skipping around to much and wish it would have told it straight from when it started instead we get glimpses as Mark remembers stuff. Mark and Alec steal aboard a ship and discover a box with the darts in them and that leads them to discover what they are. As they head back to camp they are greeted by silence as everyone is hid. As they come out of hiding Trina and Lana tell them ships came and shot people with the darts and then the madness began in some of those shot. It then goes airborn because it mutated into a different kind. They have all sorts of problems that happen to them as they leave but I don't want to give a spoiler. Just let it be known that their is lots of action and lots of secrets to the Flare come out. I didn't like this as much as the other books. It is still a great read but I just couldn't get into the characters like in the rest of the series. I felt myself disconnected to them. I would still recommend it if you love this series just don't expect to see much of the old characters.
4 out of 5 bats~Pam

Posted by Paranormal Reads at 12:52 PM