The Vagrant by Bryan Hall 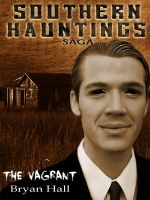 Creighton Northgate is a man shrouded in mystery and on the run from a past he doesn't even fully understand. Blurring the lines between vagabond, enigma, drunkard, and savior, he spends his days staring into the southern legends and paranormal events that most only speak of in hushed, half-believing whispers.

In the midst of a sweltering southern day, he attempts to help a homeless man who seems to share his curse; a man haunted by a silent figure from beyond this world who pursues his every step. By the end of the day, Crate discovers that some things are best left alone; some truths best left in the dark. This novellette serves as an introduction to the Southern Hauntings Saga and its central character Crate Northgate, a man whose shadowy past is slowly catching up to him. The first novella in the series will be released late summer 2012.


In the Vagrant we are introduces to Crates character a bit and get a better insight for future books as to who he is and his background. Though this is a short novelette it served as a great introduction to the Southern Haunting Saga.

At first my impression was, wow this is really short, but the length can be deceiving and proves to leave you interested and intrigued by the series and wanting to move on to the next book. I look forward to starting The Girl next.