Wicked Nights (Angels of the Dark #1)
by Gena Showalter 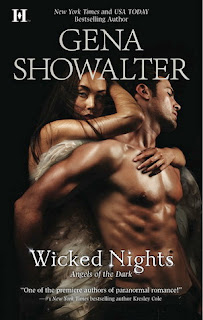 Goodreads Blurb
Leader of the most powerful army in the heavens, Zacharel has been deemed nearly too dangerous, too ruthless—and if he isn't careful, he'll lose his wings. But this warrior with a heart of ice will not be deterred from his missions at any cost…until a vulnerable human tempts him with a carnal pleasure he's never known before.Accused of a crime she did not commit, Annabelle Miller has spent four years in an institution for the criminally insane. Demons track her every move, and their king will stop at nothing to have her. Zacharel is her only hope for survival, but is the brutal angel with a touch as hot as hell her salvation—or her ultimate damnation?

Zacharel is a fallen Angel who is only for protecting humans and fighting demons. When he goes to a  institution for the criminally insane he meets Annabelle  who has been there for years for a crime she didn't commit. Demons are all over the place and they seem to be after her. Zacharel has never felt any kind of physical attraction to anyone but something about Annabelle temps him. He takes her away from the institution to his cloud to keep her safe and to figure out what is about her he can't resist. Annabelle is attracted to him but wants to help fight the evil demons. Zacharel may have to make a decision between the woman who touches him like no one ever has or his greatest treasure.

WOW what a way to start a new series. I adore and love this book. Zacharel I had seen before in LOTU books and I thought he was hot then. After reading his story he is not hot he is scorching liquid heat. Yeah I wouldn't mind this fallen angels help. Annabelle is an amazing character. She has had it rough but doesn't lay down and take it. She is out to battle demons and get her life back. She doesn't mind Zacharel's help but she doesn't want to stand back and let him do all the work. Thumbs up for a strong female character. The plot is a great one. Yes fallen angels have been done but Gena Showalter's are so hot and I can already see some of the other fallen angels that I want their story to be told. Plenty of battles take place and the story develops nicely. We even get to see some of the LOTU make an appearance. If you have read Gena's work you know you need to read this series. It is going to be amazing. If you are looking for a fantastic paranormal love story that rocks pick this up. It won't let you down.

Posted by Paranormal Reads at 8:00 AM