Please enjoy this excerpt from She Wulf, an action-packed urban fantasy by Sheryl Steines. Then read on to learn how you can win huge prizes as part of this blog tour, including a Kindle Fire, $550 in Amazon gift cards, 5 autographed copies of She Wulf, and 5 copies of its companion, The Day of First Sun.   Someone screamed; a terrified, naked shrill cry in the distance. There were sounds of hollering, screeching, grunting, stomping. The ground rumbled under Annie as she threw several layers of animal skins to the ground. Spencer jumped up; the coven roused themselves. “The mead hall,” he said as they threw open the door and ran to the village center. Chaos turned to determination as the coven traveled through the forest toward the mead hall. Annie knew the Vikings were running, screaming, panicked— but all she could hear were footsteps, and her heart pounding in her chest. Spencer had come with her; she didn’t know where he was now. She only knew the steady rhythm surrounding her as the coven followed the trail. Instinctively she went into battle mode. This was what had brought here. Her adrenaline pumped through her, her heart beat quicker, her blood boiled with rage, and she ran faster. They were through the forest and into the clearing that surrounded the mead hall. Annie’s senses changed, grew clearer and louder. She heard terrified voices; smelled fear hanging in the air. The anxious cries of the Vikings moved through her. She listened to the growling and grunting and the rage and horror the demons brought forth. It crowded her as they broke through the wooded area. Swords swished in the air; metal sliced through flesh. Anxious, chaotic screams greeted them as they entered the massacre. Blood covered the earth and stuck to their shoes and clothes. Large dark patches already drenched the ground around the hall and rolled off the dead bodies that littered the ground. Annie was sick. Women and children ran from the mead hall in the direction of the coven village, away from the demons that had overtaken them. She reached down and pulled a small boy out of the way as a demon lunged for him. She threw her first jinx at the demon, surprised by the strength of her magic. The creature flew through the air and landed on another demon. The demon on top grunted, punched the beast below it and stood up. The one on the ground rose and looked around, confused at first until it focused on a Viking running past. It reached its large hands over and plucked the Viking from mid-run and held him in the air. Terror filled the night; panic surrounded her as she conjured a small fireball. It hovered above her palm; it grew in size and strength, and she released it toward the demon. Its lightweight clothing caught fire easily. The demon hopped around in one spot, patting down the fire, but the flames grew and inched their way upwards before consuming the demon’s skin. It screamed; pain mixed with terror. The battle stopped around them and the warriors watched, entranced by the only known means to kill the demons. “Fire!” Annie yelled to them. “Kill them with fire!” As if the coven awoke from a trance, fireballs lit up the night, flying through the air and consuming the demons. Fire ate away at Annie’s demon’s flesh and crackled its bones. They popped until there was nothing left but ash. The last of the monster’s scream reverberated in Annie’s ear as the wind picked up and scattered its smoking remains in the air. She lit another ball of fire above her palm and threw it in the pile of ash, burning any possible traces of the demon. The blaze flashed and died down to nothing. She ran toward another creature.   As part of this special promotional extravaganza sponsored by Novel Publicity, the price of the She Wulf eBook edition is just 99 cents this week--and so is the price of its companion, The Day of First Sun. What’s more, by purchasing either of these fantastic books at an incredibly low price, you can enter to win many awesome prizes. The prizes include a Kindle Fire, $550 in Amazon gift cards, and 5 autographed copies of the book. All the info you need to win one of these amazing prizes is RIGHT HERE. Remember, winning is as easy as clicking a button or leaving a blog comment--easy to enter; easy to win! To win the prizes:
About She Wulf: Annie is sent through an ancient time portal with only a prophecy to guide her; she struggles with a new destiny as she tries to figure out a way to destroy an un-killable demon and return home. Get it on Amazon. About The Day of First Sun: A vampire, a rogue wizard and an army of soulless zombies are par for the course for Annie Pearce and Bobby “Cham” Chamsky of the Wizard’s Guard. But when the non-magical princess, Amelie of Amborix, is murdered by magical means, a deeper plot unfolds. Get it on Amazon. About the author: Behind the wheel of her ’66 Mustang Convertible, Sheryl is a constant surprise, using her sense of humor and relatable style make her books something everyone can enjoy. Visit Sheryl on her website, Twitter, Facebook, or GoodReads. 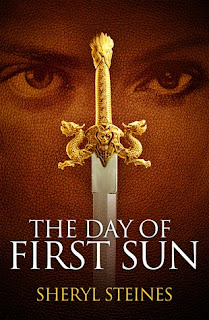 When Princess Amelie of Amborix is murdered by magical means, Annie Pearce and Bobby “Cham” Chamsky of the Wizard’s Guard are called in by the FBI. Their job is to help solve the crime while keeping the non-magical world from discovering the existence of the Wizard Council.During their investigation, Annie and Cham discover that Princess Amelie’s death is connected to a series of other crimes in the Chicago area. A larger plot involving, a vampire, a rogue wizard and an army of soul-less zombies is revealed, but can Annie and Cham discover who is responsible before The Day of First Sun?

A princess is killed and it is up to Anne and Cham to find out who did it. They work as a wizard guard protecting people from all kinds of paranormal beings. A vampire and her missing boyfriend a wizard are among their suspects. They find them together and lock them both up. They soon discover they aren't just looking for a killer but someone who wants to take down the Wizard Council on The Day of The First Sun. This is a great book. You get to know the characters and the background of the story really well. You see Anne and Cham as kids when they become friends and you get to see them become more to each other as they work together to stop evil. You get to see many other characters as well and a little about them all.The action is always going wether they are hunting for a killer, chasing vampires or falling in love. It has witches, warlocks, vampires, zombies and so much more in it. Truly a well rounded paranormal book. It is very easy to read and you are left wanting lots more of this story. A great start to a series.
4 out of 5 Bats~Pam

He came through the centuries to find her, the girl who could save them all. Annie Pearce runs through the streets of the city, chasing a demon, the likes she has never seen before. As she works to find out where the demon came from, the Wizard Guard encounters something even more bizarre. A tenth century Viking.When Annie gets sucked into the past, she must struggle with the knowledge of the prophecy that tells of her destiny. The one she must fulfill if she is to return home. What happens in the past will change the world.

I received a copy of this book for an honest review. Anne is trying to get used to working with her new partner Spencer since her and Cham can't work together anymore. Cham has a new partner as well Gibbs. After capturing a mysterious Demon and capturing it. She begins to study and finds its kind hasn't been seen in a very long time. There is also the mysterious appearance of a Viking that showed up about the same time. As the four of them finally meet up with the Viking he grabs Anne and takes her back in time with Spencer along for the ride. She is told she can defeat the demons but that is about all the help she receives. Cham, Gibbs and all their friends and coworkers try to figure out why this all seems so familiar and worry about what is going on. Anne and Cham are pushed to their limits each with their own worries. Anne must be made stronger and it's a long hard road.I enjoyed this book very much. It has a great feel to it and a Viking kidnapping a woman back in time to battle demons is very original and different. You see Anne really struggle in this book and everyone seems to be keeping secrets from her. Spencer really steps up in this book and is there for Anne doing all he can. Gibbs is so headstrong and usually rushes into things. Cham has close to an emotional breakdown worring about Anne. This story has lots of action and keeps you on your toes wondering if Anne will ever return to the future. I do wish we could have seen more of Anne and Cham together but it shows them to their selves more so you get a good feel for each of their characters. If you want a different type paranormal book give this a try. It has vikings, witches, demons and mixed together for a great story.
4 out of 5 Bats~Pam

I would like to thank Novel Publicity for letting me part of the great tour.
Make sure to enter the rafflecopter below to win some great prizes.

a Rafflecopter giveaway
Posted by Paranormal Reads at 12:01 AM